Recently, we made a trip to our local Wal-Mart Supercenter (it’s NOT “Super Wal-Mart”, ya’ll) and while I was waiting for Katie and Abby to finish their business, I spotted this Rubbermaid “Sturdy Station” changing table: 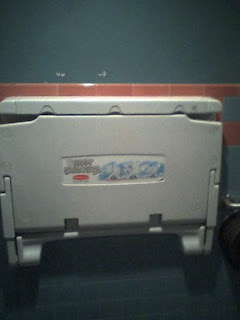 I didn’t think much of it until I noticed that a pseudo-exacto knife afficinado had altered the label so that it better represent the product: 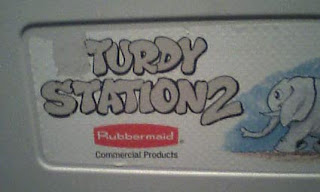 How’s that for truth in advertising?

(PHOTO REMOVED TO PROTECT THE PRIVACY OF MY CHILDREN!)

I was living in Austin, a divorced mom of one very lively 3 year old. I moved there because I thought I wanted to pursue the career of my dreams and make a lot of money doing it. (I am still in training and development, just on a different level.)
We had only been living there for a week or two and I hadn’t learned my way around the city yet. Katie had already become accustomed to getting lost while driving in the car with me and was quite adept at spotting a place to turn around or an exit we could take to get back on track. She had become my navigator.
It was a dark, rainy night and we were meeting my new boss and his wife for dinner at a local Olive Garden. The wind and rains were so fierce that the power had been knocked out for several city blocks. I was driving at turtle speed with windshield wipers furiously flapping back and forth, my eyes glued on the road, watching for my turn. Katie was safely strapped in her carseat directly behind me, the only sound in the vehicle was the steady swish, swish of the windshield wipers.
Becoming increasingly frustrated at my lack of ability to see anything beyond 2 ft in front of me, I muttered out loud, “I can’t see SQUAT!”
Within a few minutes, I found the restaurant we were meeting my boss at and when I stopped the vehicle, I turned to see Katie with her little nose pressed against her window. When I inquired of her what she was doing, she simply replied, “I’m lookin’ for SQUAT!”
The postman isn’t the only one who shows up for work in the rain.
January 27, 2007 by Karen | 1 Comment
photos

Papa Lou was a County Deputy.
These were his boots.
He died before he ever knew his grandson.
AJ’s got some mighty big boots to fill.
January 22, 2007 by Karen | 1 Comment