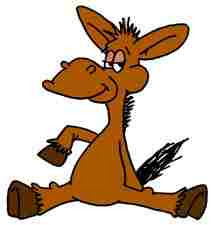 One day a farmer’s donkey fell down into a well. The animal cried piteously for hours as the farmer tried to figure out what to do. Finally he decided the animal was old and the well needed to be covered up anyway, it just wasn’t worth it to retrieve the donkey.

He invited all his neighbors to come over and help him. They all grabbed a shovel and began to shovel dirt into the well. At first, the donkey realized what was happening and cried horribly. Then, to everyone’s amazement, he quieted down. A few shovel loads later, the farmer finally looked down the well and was astonished at what he saw.

Pretty soon, everyone was amazed as the donkey stepped up over the edge of the well and trotted off!

Life is going to shovel dirt on you, all kinds of dirt. The trick to getting out of the well is to shake it off and take a step up. Each of our troubles is a stepping stone. We can get out of the deepest wells just by not stopping, never giving up!

Shake it off and take a step up!

It has been said that there is no “I” in “team”, and that’s true. BUT…there is in “WIN”. I did a word study on the word “win” and according to the Online Etymology Dictionary, it means:

a fusion of O.E. winnan “struggle for, work at, strive, fight,” and gewinnan “to gain or succeed by struggling, to win,” both from P.Gmc. *wenwanan (cf. O.S. winnan, O.N. vinna, O.Fris. winna, Du. winnen “to gain, win,” Dan. vinde “to win,” O.H.G. winnan “to strive, struggle, fight,” Ger. gewinnen “to gain, win,” Goth. gawinnen “to suffer, toil”). Perhaps related to wish, or from PIE *van- “overcome, conquer.” Sense of “to be victorious” is recorded from c.1300. The noun in O.E. meant “labor, strife, conflict;” modern sense of “a victory in a game or contest” is first attested 1862, from the verb. Breadwinner (see bread) preserves the sense of “toil” in O.E. winnan. Phrase you can’t win them all (1954) first attested in Raymond Chandler.

Brought to you by a woman who is living it. Thank you. Thank you very much. 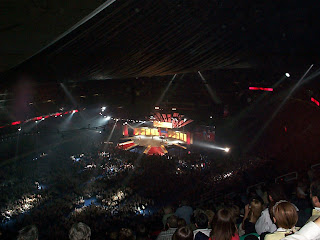 Primerica International Convention 2007 Atlanta, GA Georgia Dome
“We were not willing to sacrifice our family, but our family was willing to make sacrifices so our family can be free.”

“There are 2 ways you make it in life…Vision, which pulls you and Pain, which pushes you.”

“Everybody begins this opportunity with hope, but winners finish with courage.”

“The window of opportunity doesn’t know what the circumstances are.”

“You’ll never conquer fear, the best you can do is control it.”

We didn’t think we were going, but the hand of Providence has allowed for us to. My brother is going to house and dog sit for us, so we don’t have to worry about robbers and burglers and pests, oh my!

Y’all have a great weekend and Labor day…I’ll see you next week, as I’m not taking my laptop – we are staying with friends and I have no Wi-fi card.

I recently came across this poem in the book “You Can’t Steal Second with Your Foot on First!” by Burke Hedges and I loved it, which is why I’m sharing it with you!

To laugh is to risk appearing a fool.

To weep is to risk appearing sentimental.

To love is to risk not being loved in return.

To live is to risk dying.

To hope is to risk despair.

To try is to risk failure.

But risks must be taken because the greatest hazard in life is to risk nothing.

He may avoid suffering and sorrow, but he simply cannot learn, feel, change, grow, love, live.

Chained by his own fears, he is a slave. He has forfeited freedom.

Only a person who risks is free!

Philippians 4:13 — I can do all things through Christ who strengthens me.

The road to success is not straight.

You will have flats called jobs.

But, if you have a spare called Determination, an engine called Perseverance, Insurance called Faith, a driver called Jesus, you will make it to a place called Success.