Dave Ramsey says never to buy new. I think the last time I actually had a new car was…well, never, to be honest.

My first car was a red 1977 pinto station wagon…I wrecked it when I was 16 with my friend Jody Haas in the car. THAT was a fun experience.

My second car was a 1981 Volkswagen Jetta. A white, 4 door that had been wrecked – I remember priming and spray painting the driver’s side door because I was so embarrassed by the rust.

I drove that until 1990, when I assumed ownership of a 1987 white Toyota Celica hatchback…loved that car. Sporty, fun…but not good for a soon to be mama who had to climb out lugging an extra 50 lbs.

Then I purchased a 1995 white Honda Accord (in 1996 – probably the newest car I’d ever owned at that point). Then I moved to Texas and left Honda in Alaska because…Hello? It had no air conditioning. Did you know A/C is not standard in cars sold in Alaska? Well, it’s not.

So when I moved to Texas in 1997, I purchased a 1996 Chevy Lumina (blue this time) and drove the heck out of it until my husband was rear ended in it two years ago and the insurance company totaled it.

Then my mom gave me a 1997 Dodge Grand Caravan in Blue that SHE had wrecked (something about a motorcyclist plowing right into her passenger side — never mind that she turned left in front of him)…it wasn’t pretty, but it was still driveable. And the Lord knew I needed a van with three kids — even if it wasn’t real ‘purty’.

Now, my husband drives the ’97 grand caravan and I have a NEW used car: this 2003 Dodge Grand Caravan SE: 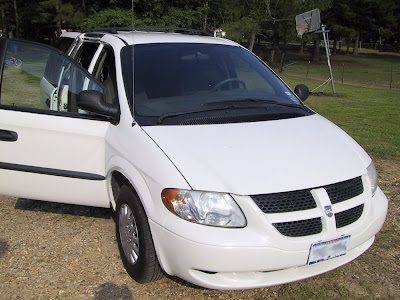 I lurve it. It drives really well, isn’t all banged up, gets good gas mileage..and best of all…it will be totally paid for at the end of this year!

Oh and hey…don’t laugh at me for blanking out my license plates. You just can’t be too careful these days. 🙂

3 Comments on New to Me