Have you ever taken a photo that was just captured the essence of who your child is, only to discover that some of the elements in the photo were less than desirable?

Take this photo of my youngest child, for instance. I snapped this one day because I had just pulled her hair up into the first set of pigtails she had ever worn. And she was less than happy about it. I love the expession on her face, but HATE the junk in the background. My shower curtain was open, the counters were all junked up, and as you can see, the lighting was horrible. This was obviously not a photograph that was going to be winning any photography awards any time soon. 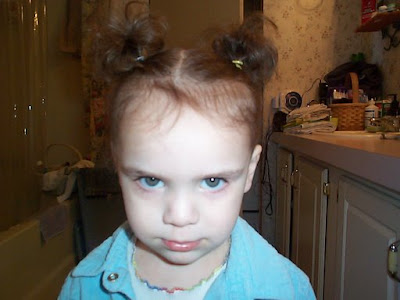 So I decided to alter it in Photoshop. I wanted it to have a dreamlike quality and I’m not going to go into all the steps I took to create the photo, but suffice it to say, there were many. I placed a set of translucent fairy wings on her because I thought that would add to the ethereal quality I was looking for. I found an old photo of my mom’s back yard and then went to work blending the two. I played with color, tones, contrasts. I even gave her a rosy glow and darkened her eyes a bit. Here’s the finished result: 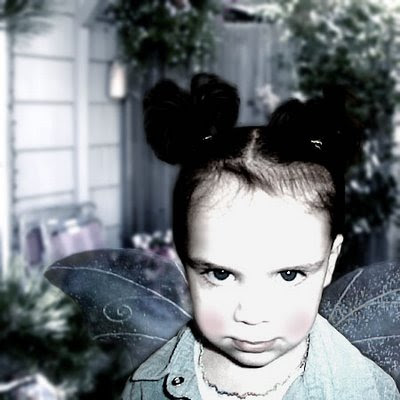 I’ve toyed with the idea of offering my photo retouching services for sale through my design site, but mainly for kids and babies.

As you can see, the difference is pretty dramatic. And if someone wanted a keepsake portrait, this would be it. What do you think?