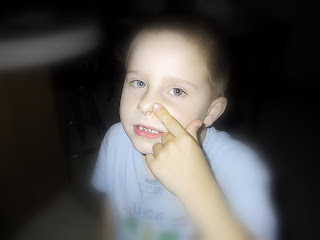 This is a photo of my son…and this is the very reason you rarely see photos of him. Because he refuses to take a serious photo. The moment the camera comes out, he commences with his “entertainer” mode. He prances, he dances, he summersaults, he flips backwards, he flies through the house as if he’s superman. He’s all boy and I love it. I just wish he’d let me take stinkin’ photo of him without his finger in his nose or somewhere else it doesn’t belong.

Two very cute things happened with him today that I have to share before I burst. But first, a little background – yesterday, we let him go with a friend to the lake to go swimming and although they put sunscreen on him, his fair little body just never stood a chance. And he burned. {I felt so horrible – like the worst mom of the year, especially after the whole cancer series!!!} So last night was spent with much holding and comforting and spraying on of the lidocaine.

Earlier today, I was on the phone with Heather from Desperately Seeking Sanity (she was saving me from the insanity I call WP) and we had actually been on the phone for quite a while when he came up to me with huge tears in his eyes and said in the saddest, sweetest voice he could possibly have mustered up, “Mama…I hurt…will you pray for me? That Jesus will heal my sunburn and make it all better?” It was a very sweet moment and of course, I put the phone down and poor Heather heard me talking to Jesus on behalf of my boy. {he’s much better tonight, by the way}

I was later struck by the fact that someone from the bloggy world got a little “real-life” glimpse into our home and I was so glad that instead of the usual noise and fighting, we were able to demonstrate our faith. We try to raise our children to walk in the light they have been given and we talk to them daily about “what the Bible has to say about {fill in the blank}”. They think nothing of asking us to pray with them or for them if they are hurting in any way and I am so thankful for that. But it’s truly rare that anyone else gets to see that from our kids – because they are, well…kids. Folks at church still give me a hard time about AJ’s daddy britches.

Speaking of praying, my husband has bedtime duty. It’s something he’s always done with our kids from the time they were born. He sings songs, tells long made-up stories that he has to consummate with a “the end” or it’s not a story and then he prays with them out loud before they go to sleep.

Usually, they are asleep within 2 minutes of him starting, but he continues to pray for a short time after they are asleep. By that time, he’s usually worn out from the nightly ritual and ready to end it.

Tonight, when he was finished, my son giggled in a sleepy voice and said, “Dad…did you know you said ‘the end’ when you finished praying just then?”

5 Comments on Now I Pray me Down to Sleep…