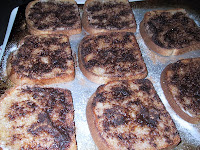 About once every two weeks, I make something for my kids that is totally unhealthy, makes them super-hyper and probably contributes to cavitites. (and then I send them to Grandma’s – oh I kid.)

I grew up on this particular breakfast treat – my mother used to make it for me on Saturday mornings and I can still remember sitting in front of my Saturday morning cartoons eating a hot piece of cinnamon toast.

Of course, I call it cinnamon toast because it sounds less threatening. My mother-in-law calls it sugar toast…which sounds like I’m a horrible mother if I feed it to my kids. Personally, I don’t see much difference between this and cake or say, pancakes for breakfast. A pancake is just a cake with syrup substituted for the frosting, right?

~Turn your oven’s broiler on HIGH.

~Lay your bread out on a cookie sheet and spread enough butter over each piece so that you have a nice thin covering. (It’s hard to say how much – too much and your bread gets soggy, too little and your sugar doesn’t carmelize – so you might have to play with it)

~Sprinkle enough sugar to hide the butter (not a thick layer, but about the same thickness of the butter you spread – you want consistency if you can acchieve it)

~Sprinkly a generous amount of cinnamon all over the sugar- pile it on, because this is what makes it taste good. (would I lie to you?)

~Place in broiler and watch until the sugar starts to bubble (usually about 3-6 minutes) and the butter, sugar and cinnamon are carmelized.

~Remove and carefully place on a plate. Let it cool down before giving it to your kids, because even when the topside isn’t hot, the steam from the underside can burn.

~Enjoy! The breakfast of champions.

So I’m curious…have any of you ever eaten this or had a variation of this? What do YOU call it?

23 Comments on The Breakfast of Champions